Will you be celebrating World Language Week? Here is the Governor’s Proclamation for the upcoming celebration, March 6-12, 2022 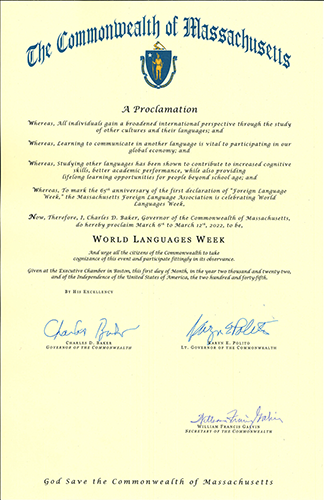 The best time to advocate for your program is when everything is going well.  Here are a variety of ideas to market your program and let your stakeholders (students, parents, administrators, school committee, district community) know about the wonderful events, accomplishments and progress of your program.

Finally, check this out if you need research to demonstrate the benefits of language learning. 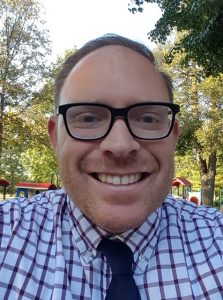 We are excited to introduce you to Andy McDonie, the World Language Support Specialist for Massachusetts. Andy joined the Office of Language Acquisition (OLA) from Ohio on May 2nd of 2019.  He was a French teacher in Southern Ohio, a department coordinator, an Organic World Language (OWL)  facilitator, and a member of the Language Testing International ( LTI) Educator panel. He is passionate about language acquisition and considers this role as an enormous opportunity to serve and work with you as you continue to advance World Language education in MA.

He welcomes your comments and questions so if you’d like to contact him, his email is:  andy.mcdonie@doe.mass.edu

So much amazing progress has been made at DESE with regard to World Languages; Seal of Biliteracy implementation, the updating of our state Framework (anticipated by January of 2021) and resources to support proficiency implementation soon to come.  Check out the new World Language page at DESE.

STAY TUNED!  DESE is hiring a World Language Supervisor for the first time since the 1990’s.  They are down to 3 finalists.  Watch for the announcement here!

IMPORTANT!  DESE is FINALLY talking about updating our MA Foreign Language Framework from 1999!

MaFLA Endorsed the ACTFL Standards to Support District Work!  As MA dives headfirst into the national proficiency movement, statewide district participation in the Seal of Biliteracy is multiplying exponentially!  Want your district involved?  In 2015, MaFLA endorsed the ACTFL World Readiness Standards in place of our MA Foreign Language Framework because our state need regularly updated and useful resources to support excellence in programming.  Check out all the great ACTFL resources aligned with the Standards to support your district’s move to proficiency and participation in the Seal of Biliteracy.

Arlington teachers participated actively in the recent ACTFL Convention in Boston.  See how they promoted their attendance:  http://arlingtonworldlanguages.blogspot.com 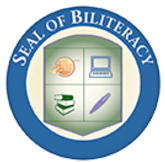 The Seal of Biliteracy recognizes high school graduates for proficiency in English and at least one other foreign language with a seal on the high school diploma. The exciting component of the Seal is that it places the focus on what students can do with the language rather than focusing on seat time. It also provides evidence to universities and businesses that our students have attained this crucial twenty-first century skill. Currently sixteen states nationally have adopted state Seal legislation and we want Massachusetts to be next!

Work is still being undertaken by the Language Opportunity Coalition to pass the Seal of Biliteracy.  Read the August Legislative Update HERE.

Concurrently with the legislative efforts, MaFLA is very involved in outlining the tiers of Seal awards for districts to use within the various levels and types of programming from Preschool through College level. To that end, certificates for the Seal are the first level to be given at the elementary level where immersion, dual language or FLES programming is available. The idea is to have students document their proficiency through portfolios and other tasks at that level. In the middle, high school and college levels a three tiered Seal would be available to those students who document the acceptable level of English through MCAS and foreign language: a Silver Seal for those who document Intermediate Mid proficiency, a Gold Seal for those with Intermediate High proficiency and a Platinum Seal for those with Advanced Low. The Seal Workgroup is delineating the list of acceptable tests in the variety of languages to maintain the integrity of proficiency focus of the Seal. The Seal Workgroup is creating a TOOLKIT for the Seal to help districts implement the Seal as well as a promotional PowerPoint that you can adapt for your needs to promote and provide information on the Seal in your district. See the results of the 2015-16 Seal of Biliteracy Pilot in MA.

Want to Know More About the Seal?

As you go through the great list of co-sponsors of the House and Senate versions of the Seal of Biliteracy, if you recognize the names of your representatives, please contact them and thank them for their support! The Massachusetts State Government website has become much easier to use. Find your representative at the click of a mouse.

Various members of the MaFLA Board collaborated on Department of Elementary and Secondary Education (DESE) Committees for teacher evaluation resources specific to foreign languages.  They are available here. MaFLA has been discussing model District Determined Measures with the DESE as well and will make resources available when we have them.  In the meantime, a 3-hour workshop on DDMs will be presented at the Annual Conference, October 23-25, 2014.  In addition, MaFLA is preparing a special issue of the quarterly MaFLA Newsletter for end-of-year 2014.  If you would like to share a DDM, please contact Guest Editor, Jeanne O’Hearn.

The Seal of Biliteracy legislation has been enacted in nearly half the nation with a dozen more states in various stages of the legislative process. This national effort to reward students for their functional biliteracy in English and another language is transforming foreign language programming. The programmatic focus to move students up the proficiency ladder with a goal of Intermediate Mid on the ACTFL Proficiency Guidelines as a minimum, points to the importance of multilingualism for college and career readiness. A Seal of Biliteracy strengthens foreign language programming in the state by putting the emphasis on what graduates are able to do with the language and rewarding them for high performance.